Now she’s channeling that energy to make things happen for a segment of the population that desperately needs something good to happen – domestic violence survivors.

Why? This cause hits home with Diana as she was once in this situation. According to the Center for Disease Control and Prevention roughly 25% of women that experience physical violence by their intimate partner at some point in their lives.

Diana recently held a ‘Fill a Purse’ drive-by donation in Glastonbury to collect necessities for women with children currently in crisis in domestic violence shelters.

“I was once in this situation as a young mom,” Diana said. “I remember the conversation I had to have with myself in order to pull through and search for a better life for my children and I.”

“I can’t even imagine what these women are going through during the pandemic, not having an option (to stay with friends or family) they would have otherwise if not for COVID,” Diana said. “I admire their courage to reach out for help despite the circumstances. That’s a huge step.” 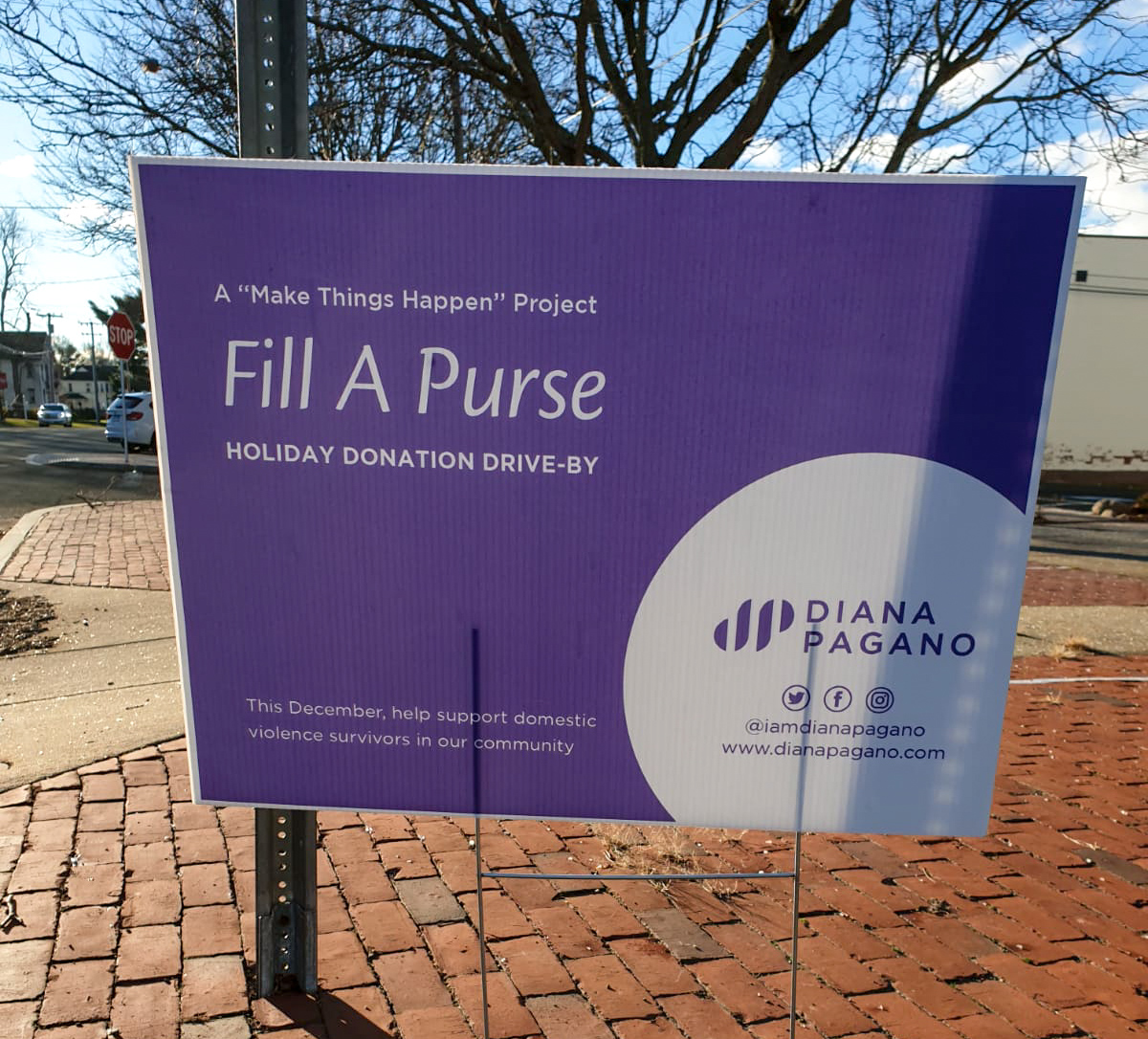 What is Domestic Violence?

The National Coalition Against Domestic Violence (NCADV) defines domestic violence as “willful intimidation, physical assault, battery, sexual assault, and/or other abusive behavior as part of a systematic pattern of power and control perpetrated by one intimate partner against another.”

Domestic violence can include:

That is around the same age Diana was when she experienced domestic violence. She would tell other young women this:

“I’ve been in your shoes. I know it may  feel that it is hard to leave but I promise you, once you do, you will look back at the strength and courage you had,  and feel proud.”

The other Pandemic: Domestic violence during COVID-19

There are myriad factors that cause abused women to stay with their abuser. The sad reality is women who do manage to escape an abusive relationship leave an average of seven times before finally leaving for good, according to the National Domestic Violence Hotline.

Now, unfortunately due COVID-19 restrictions, many women are trapped. They can’t leave. They are stuck with their abuser during a once-in-a-century pandemic (the option to stay with a friend or family member has been taken away).

It’s a nightmare scenario for any woman – or man for that matter (one in 10 men experience domestic violence in their lifetimes as well).

Furthermore, the increased time together with no escape routes has led to more domestic violence cases. The American Journal of Medicine recently noted that domestic violence in 2020 was up 10% in New York City and roughly 20 percent in cities like San Antonio and Portland, Oregon.

Karen Jarmoc, the president and CEO of The Connecticut Coalition Against Domestic Violence, recently told NBC Connecticut that shelters are at 150% capacity. The other 50% are staying in hotels.

Another scary aspect of domestic violence and COVID-19 is this: Women are now even less likely to report domestic violence, for fear of retribution. It’s a phenomenon that has always existed, but one that has been exacerbated by the pandemic.

This is evidenced by the fact the New England Journal of Medicine recently released findings in a report titled “A pandemic within a pandemic – Intimate Partner Violence during COVID-19.”

The report stated that in some regions the number of calls dropped by 50% in the early stages of lockdown orders being instated, but it noted that experts were aware that rates hadn’t decreased. The victims were just unable to safely reach out for help because their abuser was around 24/7.

The situation is more frightening when you consider the two studies referenced above together. If cases are up 20% in some cities, yet there’s also this phenomenon of fear of reporting, how many cases must there be in totality? It’s surely more than 20%.

The fact that the pandemic is trapping these women with their abusers is one of the biggest reasons Diana felt compelled to help those who have taken the bold step of leaving their situation during a pandemic.

“This is really dear to my heart to be able to empower women, and even men alike, who are courageous enough to leave a situation,” Diana told NBC Connecticut.

The turnout for ‘Fill a Purse’ went well beyond Diana’s expectations, with more than 100 packages donated. If that is where the story stopped, it would still be worth writing about.

It does not stop there.

During the ‘Fill a Purse’ drive something amazing happened. Local news stations picked up on her philanthropic efforts. WTNH , NBC Connecticut and Telemundo had Diana on camera to discuss domestic violence during the pandemic.

All of it brought Diana to tears.

Diana was so thankful that local media helped shed light on an important subject. She was stunned at the enormity of what she made happen for the women who are in the same shoes she was years ago.

Alba Peguero of Vernon was among the people who stopped to chip in (she donated socks, nail clippers, among other things on the Amazon “Wish list” Diana created).

“I think it’s great that Diana is making things happen,” Peguero told NBC Connecticut. … “We are going through tough times.”

Truer words have never been spoken. Diana wanted to help during these tough times, and she did. She wants that to be the main takeaway from the success of the ‘Fill a Purse’ collection.

“You don’t have to be Bill Gates or Oprah to bring a community together and really make a difference in people’s lives,” Pagano said. “Regardless of who you are, where you come from or who you know, you can make big things happen.”

Make things happen. It’s what Diana repeatedly stresses in company meetings and her speaking engagements, which span from London to Arizona. Diana tells her audience they can “Make Things Happen” and achieve the life they want, and it starts with a change in mindset.

Changing your mindset seems benign in the grand scheme of things compared to what Diana changed more than a decade ago. She’s determined to help other women make the same change and thrilled the local community responded the way it did.

Diana empathizes with women who are struggling to escape a toxic relationship. She understands the feeling of ‘what now?’ that awaits women who leave. She understands that as disturbing as this might sound, sometimes the unknown might seem scarier than staying with your abuser.

What is her best advice to women in an abusive relationship?

“The first step is the one that will break the cycle,” Diana said. “You will see that it can be different – that you do deserve a better life. Once you take the first step, the second step will appear, and then the third. You will look back at this one day and empower someone else with your story.”

If you or anyone you know is a victim of domestic violence there are resources available.

Watch: Diana’s interviews on her ‘Fill a Purse’ drive